Well, I have this blog thingie.

I haven't updated here in forever, and I want to start posting knitting stuff somewhere (especially in light of the ravelympics!) and so I start with the project I just finished and am pretty psyched about: 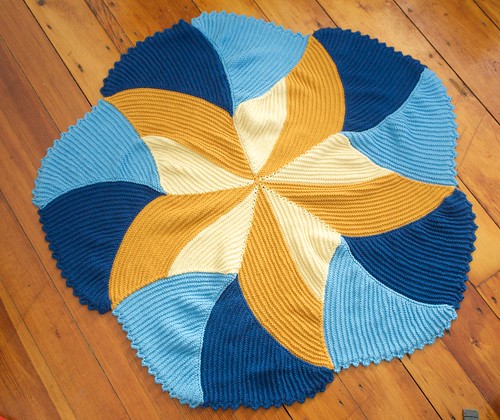 It's a baby blanket for my ex-future-step-cousin-in-law, ha. I started it before the ex part got tacked on the front and saw no reason not to finish it and send it on, I am trying to get yarn out of my house and she's a super sweet girl. I got it there *just* in time for her baby shower, yay USPS.

It didn't block quite as flat as I would have liked, but I still think it's great.

And now - WTF are the ravelympics, you ask? Well, they're a silly, fun knitting event timed with the olympics. Cast on during the opening ceremonies and knit! There are 33 events that are categorized by project type and there are hundreds of teams. I just joined Team Stash Down 2010 because I will be knitting using only yarn that I already own for the next two weeks of mayhem. On the docket are mostly small projects, actually - just a lot of them. I'm trying to use up all the one skein this and one skein that laying around my bin - mostly gifts and hand-me-downs.

I'm going away for the weekend with some skiiers and will hopefully have much FO to report on Monday.
Subscribe
Comments for this post were disabled by the author